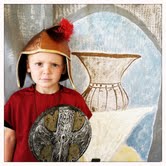 Here is Asher, my littlest Roman!

Today in our homeschool we ventured into the life of Julius Caesar. We read about his military conquests and ascent from one of Rome's three Consuls to Dictator over the entire Roman Empire. The boys were listening well (for three squirrelly boys that is) but when their Dad told them the story of Julius Caesars assassination by his close friend Brutus and others in the Senate, the boys leaned in with eyes open wide and jaws dropped. The story ended with Caesar in a pool of his own blood on the white marble floor of the Senate. Looking up into the eyes of his betrayer Caesar whispered the words, "Et, tu Brute?" Silence. "Even you, Brutus?" my husband said again.

From there we moved on from Rome to Math. As Brody studied his math facts a big black fly buzzed annoyingly around his head. He put down his flashcards, went to the kitchen counter for the fly swatter, then swatted the fly against the window in one attempt. The bug fell to the ground and Brody squatted down to poke at it. I was near enough to hear him whisper the words, "Et tu, Brody?"

My immediate thought was, "O, I wish they were older so I could break out some Shakespeare!"

A friend of mine read this post a few days ago (I am now back revising it based on her encouragement.)  She challenged me not to wait to introduce my three to Shakespeare.  Here is what she wrote me:

They ARE ready now! I do Shakespeare with all my girls including my 5 year old. In fact, no joke, as I am laying here reading this post, I have on my lap a comic book version of Julius Caesar that I am previewing. It is called Graphic Classics by Barron's. Usborne also does some great storybook versions of Shakespeare's plays. On youtube, look up Shakespeare animated tales for a 30 minute cartoon version of many plays using original language. I usually read and discuss a children's version of a play and then show the video so they are already familiar with the storyline and characters and then the video exposes them to how the original language sounds without frustrating them because they already know what is happening. By the time they get "old enough for Shakespeare" the plays will feel so comfortable and familiar to them that the language will not be the put off that it is to so many. It is kind of like teaching kids Bible stories when they are young, with the goal of creating familiarity to so that we can transition them into reading original source down the road.

Thank you, Jennifer!  Your advice is so simple and very similar to the way I've introduced my guys to other great authors.  I don't know why I didn't think to do it with Olde William.  From the time my first born could read I've read simply children's adaptations of literature such as White Fang and Little Men, allowed the kids to watch a film adaptation, had them read the children version and then follow it up with me reading from the original text.

But this post is really something bigger than Shakespeare or even introducing our children to great literature.  I'm learning that young boys are ripe for learning so many thrilling and exciting things right now!  As part of a Classical Conversations group the boys and I are learning history and geography chronologically, memorizing a history timeline as we go. Few things are more precious or surprising to me than watching our four year old recite his memorized history sentences and songs. But it's more than memorization, these boys' minds and their imaginations have fully engaged in the learning.

At 4, 7, and 8 my guys still play superheroes. They dress up, build forts, and attempt to conquer one another every day. Heroes from history, the Bible, and literature are natural segues into learning. Our time in Ancient Egypt complete with Pharaohs and tomb robbers was great fun for the boys and included tons of dressing up and art. Then there was Greece and their powerful gods, Odysseus and his Odyssey, the story of Marathon, and the Olympics. Moving on to Rome these past few weeks has continued to thrill and inspire the boys with stories of Gladiators fighting to the death and Hannibal (Military Commander of Carthage) attacking Rome on a herd of Elephants.

Over the past couple of years it was clear to me that traditional classroom learning wasn't working for my two oldest children, and so I began to imagine bringing them home and wooing them toward knowledge with fun, exciting, even masculine stories and adventures.  It is day #60 in our first year homeschooling and I have to say that while every day brings challenges, the joy of attempting to do this great thing outweighs the difficulties.  I am humbled, thankful, and in awe tonight.

Next stop India.  (Any ideas of Great Literature we can tie in here?)