Daniel in the lions' den, David walking out to face Goliath,

Caleb and Joshua calling out to their generation,

"Be Strong in the Lord!"

Tomorrow Brody represents his school at a county-wide speech meet.  My gangly, speech impaired 8 year old, will stand before a room full of adults and deliver his memorized piece.  And he's going to do GREAT!  Tonight, however, my mind is cycling through all the pre-school and kindergarten concerts where he scowled out at the audience and mouthed the words in an exaggerated display, "Take. Me. Home. Now."

Brody has a metal expander on the bottom of his mouth under his tongue, and another across the roof of his mouth, and braces too.  Even if his r's and l's were perfect, his entire mouth is full of metal.  But tomorrow he will purpose to swallow down all the spit in his mouth, take a deep breath, look out into the crowd, and introduce himself.

The night before Valentine's Day I put all three boys down to bed early.  The next day would include crazy amounts of sugar and artificial food dyes, which really rev my kids up.  A good night's sleep would help them with impulse control amidst the next day's sugar induced fun at school.  Also, our boys had all been sick, and a good night's sleep was in order.  And last but not least, I had a few more Valentine's Day decorations to hang.  At 10:45pm, before I dragged myself to bed, I checked on my guys only to find Brody pacing his room, looking over his personal stash of temporary tattoos, stickers and action figures spread across the floor.  "What are you doing, Brody?"  I sighed.

His eyes immediately filled with tears, "I need to have things for my class, lots of special things."

"But we already have fun-dips packed up in your backpack.  Those are the best Valentine's of all... they are pure sugar!"

"They've helped me find everything.  They deserve it."

Oh, my Breaking-Mama heart!  It made sense then, so I hugged him close, still not sure he was fully awake.  Brody had just started at this new school, mid-semester, and the stress of the transition tumbled out with tears.  "They've helped me every day, and been so nice to me.  I need to give them something really special."

I came back with a bag of chocolate coins wrapped in red and silver foils.  "I bought these for you and your brothers, but if you want to write your name on each one with a sharpie and drop it in with your valentine then you may." The tears ceased.  It was then he looked out of his room and saw the red heart balloons that filled our kitchen, and he smiled.  "Brody, you've been so courageous to go to this new school.  Every day you've hoped out of the car with a smile and had a great attitude.  I know this teacher moves quickly from one subject to another, and we never went that fast in our homeschool, but you've been so brave!"  His eyes were still on the heart balloons down the hall.  "Why don't you go put one of those balloons and a chocolate coin on each of your brother's bed side tables as a surprise for the morning.

He finished his business as cupid and was asleep under the covers before I made it to my room.  As I laid in my bed later, I was impressed with the courage my tender-hearted middle-child has displayed these past couple of months.  He didn't want to go to this school, but he needed to be there.  And I thought of Courage - what it really is, and what it is not.  Courage is not doing something that is difficult for others, courage is doing something that is difficult for the one doing it.  And courage isn't just doing what is hard, but knowing that it is hard, wishing it didn't have to be done, but submitting to the hard.  Like Jesus, before He was betrayed, praying that the Father would remove the cup from before Him.  Though, "Not My will, but Thine be done," he submitted to His Father.

A few years ago Brody competed in a County Rodeo as a Mutton Buster.  Like Bucking' Broncos, but bucking' sheep.  Little boys and girls, dressed in jeans, boots, and helmets, exploded out of a miniature shoot on the back of a wholly mammal.

He took an early nap that day, and woke up with the most serious expression I ever saw.  He didn't speak all afternoon as I dressed him in his starched blue wranglers and took him to his first Rodeo.  We checked in, pinned his number on his back, and I gave him a lollipop.  Still not a peep.  I'd never seen anything like it.

At the end of the ordeal, when all was said and done, and he was wearing a man-size belt buckle for finishing first, he whispered "I was so scared."

Courage.  Doing something that frightens you, but you "Cowboy Up!"  Courage. 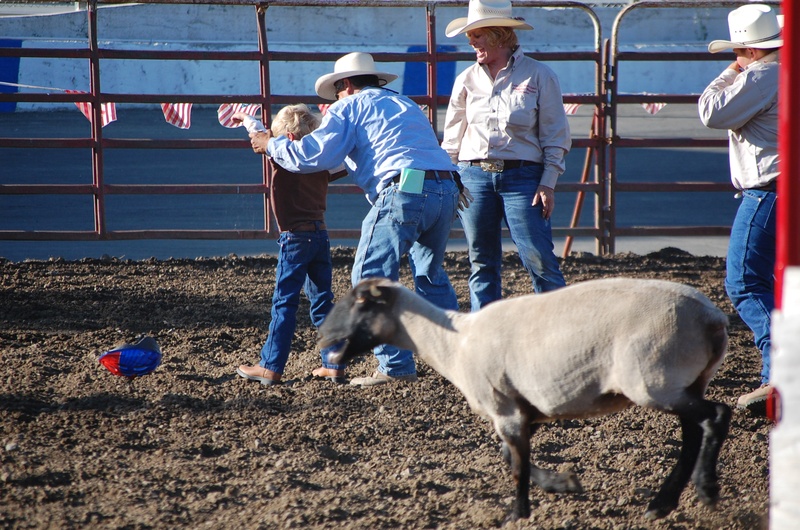 I've been feeling God call me to do something I'm scared of.  Stepping out of my comfort zone and following him to new places.  Like Daniel in the den, and David on the open field between the Israelite and the Philistine armies, like Brody heading to a new school, onto the back of a bucking sheep, or in front of his peers and their parents... Courage.