I was just a child the first time the notion of putting on a show entered my mind.  Before i knew what performing was, I was standing on the family hearth belting out tunes and doing inappropriate impersonations such as Mae West's "Heya big boy... Why don't you come up and see me some time?"
I recall being at Disneyland with my church youth group when I was around 9 or 10 and stopping abruply to watch a group of kids performing a 1950's medley up on a pavillion stage.  And when a teenaged girl in a pink satin jacket, wearing a ponytail high on her head started to sing "My boyfriend's back and you're gonna get in trouble..."  I was sold!
A year later I watched Mickey Rooney and Judy Garland in the 1939 classic "Babes in Arms", in which they put on a show in an old building to raise funds and save their vaudeville troupe.

Next I read "Little Women" by Louisa May Alcott.  After finishing the novel I watched the film in which Katherine Hepburn embodies all of  Jo's precocious and creative passion, as she writes, directs, and stars in silly little melodramas with her sisters.  My heart was won, absolutely. 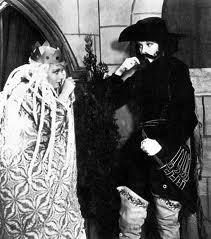 Fast forward 26 years, and I am busy planning my boys' first "Summer Stock Theatre".    The theme will be DRAGONS, and the play will open with the boys reciting this marvelous poem, entitled, Once They All Believed In Dragons .
Once they all believed in dragons
When the world was fresh and young,
We were woven into legends,
Tales were told and songs were sung,
We were treated with obeisance,
We were honored, we were feared,
Then one day they stopped believing--
On that day, we disappeared.
Now they say our time is over,
Now they say we've lived our last,
Now we're treated with derision
Where once we ruled unsurpassed.
We must make them all remember,
In some way we must reveal
That our spirit lives forever--
We are dragons! We are real!
~ © Jack Prelutsky
Next the boys will present a short play based on the classic tale, Saint George and the Dragon, followed by Caleb playing "Puff the Magic Dragon" on the Piano.  There will be watercolored pictures of dragons and castles and hand sketched drawings of knights on display.  And of course they will have costumes... O such wonderful costumes!
Caleb's sheet music came in the mail today and all three of the boys are excited to get started with "rehearsals."    Yes, I might be a funny little theatre nerd... but my boys and I are going to have a wonderful time putting on a show this Summer.  My... Babes in Arms!

Reply LubbyGirl
9:54 AM on June 7, 2012
AWWW...I love this! My best friend's kids (now grown) used to put on little skits and plays they'd made up for us, every time their parents would come visit. We still talk about a couple of them, even though the youngest just got out of the Army and is now training to be a helicopter pilot!! And the daughter has four children of her own!! Memory makers.

LubbyGirl says...
AWWW...I love this! My best friend's kids (now grown) used to put on little skits and plays they'd made up for us, every time their parents would come visit. We still talk about a couple of them, even though the youngest just got out of the Army and is now training to be a helicopter pilot!! And the daughter has four children of her own!! Memory makers.

Reply Kelli
4:10 PM on June 8, 2012
I was the girl who forced her little brother to dress up and do plays with me. Poor kid was subjected to all sorts of impersonations, always against his will. I hope we will get pictures of the big event! Sounds like lots of fun!